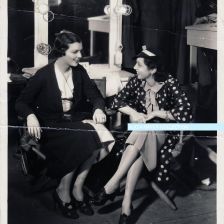 Here’s my glamorous grandmother, Mitzi Cummings, on the job again for her Photoplay column. This time she appears to be visiting behind in the the scenes of Fox Film Corporation’s Black Sheep (1935), which starred Edmund Lowe, Claire Trevor and Tom Brown, with Adrienne Ames in the supporting role as the haughty Millicent Bath.

The first photo has writer/director Allan Dwan and what appears to be some flirty business involving Adrienne Ames and Mitzi and their make-up compacts (I think)…??

The next photo is Adrienne applying make-up to her pal, the Countess of Warwick, who was a house guest of hers at the time, so when in Hollywood make sure to play an extra in a film!

And then the final photo in the series is Mitzi with the Countess (anyone else notice that make-up desk is in need of repair?!), who I remember reading somewhere had wanted to stick around and try her hand at acting.

Do you know if she got any further roles? Click here for the link to this conversation on my Facebook page where you can add your comment.

Adrienne Ames, on the other hand, was all over the place, and in more ways than one. She was the prodigal party girl and reading her exploits makes you wonder what you’re doing with your life.

She was married to billionaire Stephen Ames (who later married Raquel Torres), and then to actor Bruce Cabot. Adrienne Ames would be involved with others, including one of Hedy Lamarr’s beaus and a Canadian millionaire, but after she fell out of favor and roles dried up, she left Hollywood for the east coast and became a popular radio host in New York City.

Sadly, Adrienne Ames died at just 40 years old of cancer. She was interred back in Fort Worth, Texas where she was from.

Here’s a very well put together timeline of her life, which is pretty eye-opening.