March 26, 1946: Here is Eleanor Roosevelt just a few months after her husband’s death, the end of WWII, and the liberation of Auschwitz. 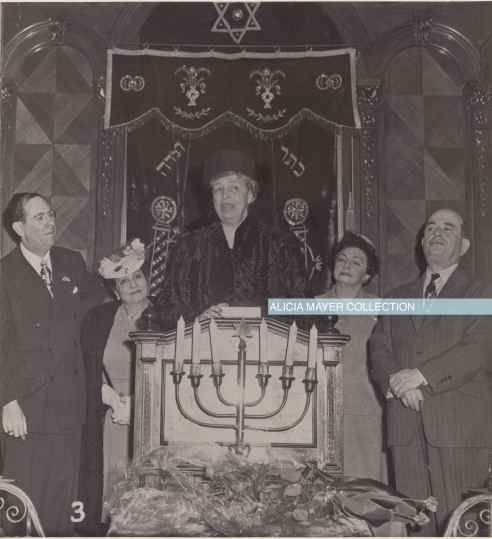 This remarkable photo may be the only one documenting a First Lady speaking from the sacred ‘bimah,’ where the Torah is read in a synagogue – in this case in the little temple built for the residents of the Los Angeles Jewish Home for the Aging (JHA).

The honor that is bestowed on her to speak from the bimah is huge, as is the honor that she is bestowing to address this tiny congregation as a First Lady (former, at this stage), and as a humanitarian known on an international stage.

An excited group, including my great-grandmother, Ida Mayer Cummings, greet former First Lady, Eleanor Roosevelt, as she arrives at the Los Angeles Jewish Home for the Aging on March 26, 1946.

In fact, just two months before she wrote in her syndicated column, ‘My Day by Eleanor Roosevelt,’ about visiting bombed out portions of London and surrounding villages. 1946 was a huge year for her as she crisscrossed the United States and the world on her own personal social justice and peace mission.

Here’s what she wrote about this visit:

“Yesterday afternoon, I drove out to the Junior Auxiliary Jewish Home for the Aged. This home is for both men and women. They have a small hospital, a very charming dining room and auditorium, a small synagogue, and pleasant living quarters.

The old Jewish people there seem to spend most of their time in prayer, and so it was fitting that they should hold their short but moving ceremonies of welcome to me in their synagogue. In these ceremonies, they remembered my husband as their friend and presented me with a gift which will always have value because of the sentiment attached to it.

I could not help being thankful that, in this country, these old people could find a sanctuary in their declining years. A happy contrast to the sad old people that I saw in a Jewish refugee camp in Germany.”

Standing next to her is the legendary Rabbi Edgar Magnin (he served the Wilshire Blvd congregation for 69 years), my great-grandmother, Ida Mayer Cummings, and on the other side is Louis B. Mayer’s wife, Margaret Mayer, and a man identified as Nathan Weisman.

This was the first photo I saw when I arrived for my morning of scanning at the JHA in Reseda last week. I just could not believe my eyes, there is so much in this photo on so many levels, but I knew I had hours of scanning ahead of me (the pile was two coffee cups high).

So I carefully removed the photo from its matting, placed it in my trusty scanner, pressed ‘scan,’ removed it, laid it on what would become my ‘done’ pile, and grabbed the next photo.

Still, it has been on my mind every day since then. And even though it is from 1946 – 71 years ago – it has a significance and even urgency that reaches out to us right now, today.

Here’s an excerpt from Eleanor Roosevelt’s entry just a few days after this photo was taken, following a meeting with the Jewish Welfare Fund to discuss re-settling survivors of the Holocaust:

“Had the conscience of the world been sufficiently awake, the tragedies of these people need not have occurred. It makes me wonder if we in this country should not struggle harder to achieve the equal rights guaranteed by our Constitution to all within our nation, since only by so doing can we stand before the world with clean hands when we plead for the wiping out of race hatreds and religious prejudice in the rest of the world.”

Link to the My Day by Eleanor Roosevelt Project and every entry: https://www2.gwu.edu/~erpapers/myday/ 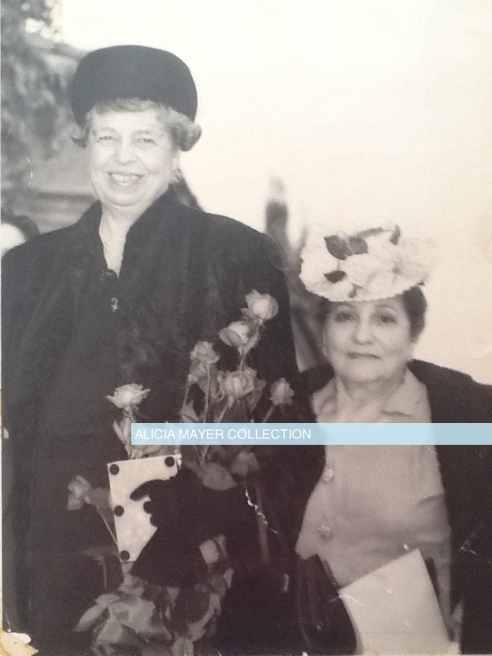 My great-grandmother, Ida Mayer Cummings, with Mrs Eleanor Roosevelt. They were regularly in contact and part of the collection includes a series of letters back and forth.