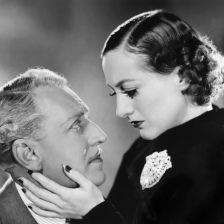 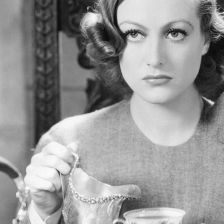 So a couple of weeks ago – around the same time as I stumbled across the mystery manuscript, which you might remember – I promised I would share two letters from Joan Crawford that were in my grandmother Mitzi’s papers.

I took this photo last night when maybe the lighting was a bit too moody because that’s not what you think it is on the porcelain lady – it is probably a poorly placed shadow and plenty of dust! And about her, I don’t think she’s one of those aids Victorian era doctors had on their desk so their female patients could discreetly point out where their ailments were.
The porcelain lady is actually the lid to a box that I think was also Mitzi’s, and I had forgotten what was inside: there was a dear little photo of my eldest son on the day he was born (he’s 19 now), some tiny felt thing from one of the kid’s kindergarten projects, a few special coins, and as always a random kid tooth – lol!

My 25-year-old daughter thinks it’s hilarious that she can pretty much open any little special container in my bedroom and find a whole ghastly collection of tiny teeth. Well, I had three kids so that was a lot of teeth! And frankly, the fact that they are spread out like that just highlights that I was a pretty crap tooth fairy.

*But I digress. Back to Joan.*

The letters are dated August 2, 1968 and February 7, 1969. The first must be a response to Mitzi advising Joan that my great-grandmother, Ida Mayer Cummings, had sadly passed away in April that year.

My dear Mitzi,
Thank you for your very sweet letter. It was good to hear from you again. Your letter touched me so much. I know so well how all of you treasured your mother, as she was a remarkable lady. She shall be greatly missed.
Thank you for your nice comments about me during the MGM days. I have a great many pleasant recollections of those times – and it was dear of you to share some of yours with me, and to write such kind things about me.
Bless you, and my fond wishes to you, Jack, and Mrs. Rowland.
With love,
Joan
What a beautiful and gracious letter. Her reference to “Jack” is my great-uncle, Jack Cummings, Mitzi’s older brother, who was a prolific producer at M-G-M and no doubt had quite a bit to do with Joan Crawford. And her mention of “Mrs. Rowland” is Ruth, Mitzi’s older sister, who worked in M-G-M’s script department for many, many years, and they would have known each other but perhaps not well enough to refer to her by her first name. Ruth married director Roy Rowland, who also knew Joan.

And so it goes – they all knew each other and had known each other for decades. In fact, here’s a fabulous, very early publicity photo of Joan Crawford from the 1920s signed to Mitzi. Joan was only about 18 months older than her and had signed with M-G-M in 1925 when she was in her late teens. I think Mitzi dearly wanted the same thing.

The second letter relates to an invitation to attend the annual fundraising gala for the Los Angeles Jewish Home for the Aging (JHA) that Ida was so known for, and which Mitzi continued for many years.

My dear Mitzi,
Thank you for your sweet letter, your current Bulletin and the dear message from Jack. I was delighted to hear from you again.
I think it is wonderful that you are continuing the annual Charity Balls for the Jewish Home for the Aged, and the one this year will be a tribute to your mother. I wish I could attend, but I will be in Toronto on February 23rd, on a business trip, working very hard. I am so sorry about this conflict in dates, as I would love to pay tribute to your beloved mother.
My very best wishes to you and your family – and I am sure the Ball will be the great success that it so well deserves to be.
Joan
Don’t these two short missives make you long for the now totally lost art of letter writing? They are brief, but so well written and lovely to read. Of course, Mitzi would also have brought her memories of Joan to each letter reading experience.

Was she pleased with each letter, even though she might have been disappointed with the second one? When she next spoke to her brother Jack, which I think was pretty often, if not weekly, did she pass on Joan’s regards?

I’m sure she must have. He would have been pleased.

I love thinking about all of that.

Note: Please feel free to share my posts – here and on Facebook! I love that. But should you wish to use any text or photo of from our family’s collection, always seek permission.