When your family members are the ghosts in someone’s home… 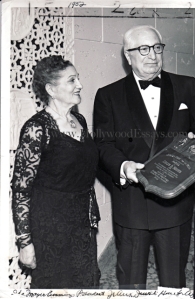 Nearly four years ago, for whatever crazy reason, I typed my great-grandmother’s name, Ida Mayer Cummings, into Twitter’s search field. This is a woman who was born in the late 1800s, and died at age 86 in 1968 before fax machines were invented, when computers took up whole rooms, not just your pocket.

So you can imagine I really had no expectations that I’d find anything, which is why the tweet that appeared remains one of those miracles of social media.

The tweet said: “My home was built for Louis B. Mayer’s sister Ida & is being included in a book about costume designer Travis Banton, who dressed her. #Cool”

I think I blinked several times, rubbed my eyes – yep, tweet’s still there. I’m not making this up. So I tweeted back, basically: Ida’s my great-grandmother, I’d like to know more.

And thus began a wonderful back and forth between myself and Kes Trester, a former film producer and now author of ‘A Dangerous Year’ and other books in the YA genre. Kes and her lawyer husband and two teenage children do indeed live in the home that Louis B. Mayer bought for his older sister, Ida, and her four children on South Tremaine Avenue in Los Angeles. 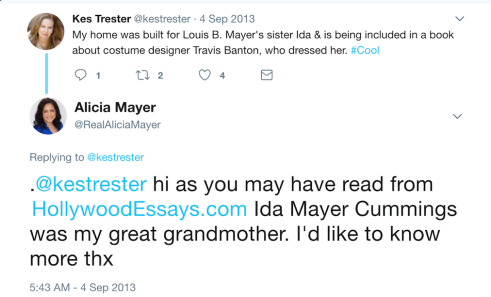 Long story short: once L.B. settled in the land of milk and honey, being a good Jewish son and sibling, he eventually brought out his entire remaining family to live close to him. He even looked into moving his beloved mother’s remains from the Jewish cemetery in Saint John, New Brunswick in Canada but was told no. Still, he brought over his father, Jacob, and sister, Ida; his younger brothers, Rudy and Jerry, would eventually follow from various cities out east, but by then his oldest sister, Yetta, already had a family of her own in Montreal.

The house he bought on South Tremaine for Ida is conveniently situated near the Wilshire Boulevard Temple where my great-grandmother would’ve spent quite a bit of time and was very close to Rabbi Edgar Magnin and his wife. It’s also very close to MGM’s old studios in Culver City, where her three oldest children – Jack, Ruth, and Mitzi (who would become my grandmother) – worked in various capacities. 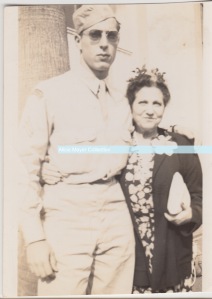 This meant it was also close for Louis to stop by and check in on her and bring their father over. It was also in this house where Ida’s youngest son, Leonard, lived until his death of leukemia in his early 40s in 1965. Unlike the rest of the family, the movie business wasn’t for  “Sonny,” as he was known by all. Instead, he became a sports writer and publicist, and served proudly in WWII. I don’t think Sonny lacked for female companionship but he never married. I guess that right girl never came along.

I have letters between my grandparents from 1939, the year they were courting, and Mitzi describes a very busy home on South Tremaine, with a very demanding lady of the house, so much so that they found it difficult to keep maids from one week to the next!

Ida’s home was also her base of operations from which she organized her many fundraising activities and events, wrote thousands of letters, and of course, entertained – I have linen from her home that’s for a table that seats 14 or maybe more.

I’m not sure how long my uncle, MGM film producer Jack Cummings, lived there, he married and moved into his own home, as did Ruth, who married film director, Roy Rowland. So until Mitzi married in the early 1940s, for a long time it was just her, Ida and Sonny at the house, and from her letters it was often mayhem, productive mayhem, but still, insanely busy. 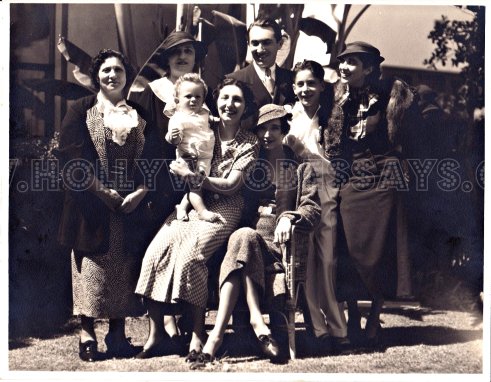 At some point during that time, Sonny went off to college. What a story that is! Mitzi wrote about it in agonizing detail in a letter to Sol. Apparently, there was madness in the house for weeks just preparing him to leave sun-kissed LA: an entire cold weather wardrobe was needed; new stationery had to be bought; luggage was needed! And then after all of that, the kid missed his train because up to the last second they were still waiting on a telegram confirming his admission. I have no idea why that timing was so tight…

My image of the house on South Tremaine is people running up and down the stairs and in and out of rooms with doors flying open or slamming shut; the phone ringing off its hook. Delivery boys, door belling ringing…

Finally, the telegram arrived – a puffed out pimply kid hopped off his bike, knocked at the door on South Tremaine, and was mobbed by several impatient family members just waiting on the other side of the door – admission was granted! Arrangements were made for him to take the next one out and would you believe, he sat the entire trip out east with Orson Welles and a Pulitzer Prize-winning writer whose name I have since forgotten. Oy! 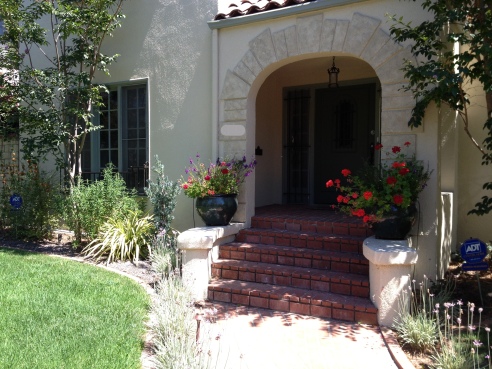 A photo of the house from 2013 that Kes graciously emailed when we found each other.

The exciting news is that Kes has graciously invited me to visit Ida’s old home, now her very busy home, during my trip to Los Angeles and I can’t wait. She tells me (and also advises me that she’s a perfectly rational person) that the house is “very active” and there is a lot of random door opening and closing, things that appear or disappear, the feeling of various presences, and other goings on.

None of which surprises me in the least – these were very busy, loud people in life and I can’t see why death would stop that. 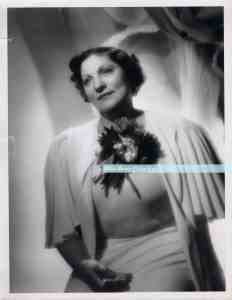 What I absolutely love is that apparently everyone in Kes’s family is cool with this, and they say hi to Ida and Mitzi and Sonny. So it’s all very harmonious between living family and ghost family.

As a token of my sincere thanks to Kes and her husband and children, and to return the grand lady to her home, I will bring a print of one of Ida’s beautiful portraits taken by the amazing MGM photographer, Ruth Harriet Louise.

So I wonder what might happen when I walk through that door… I’ll let you know!