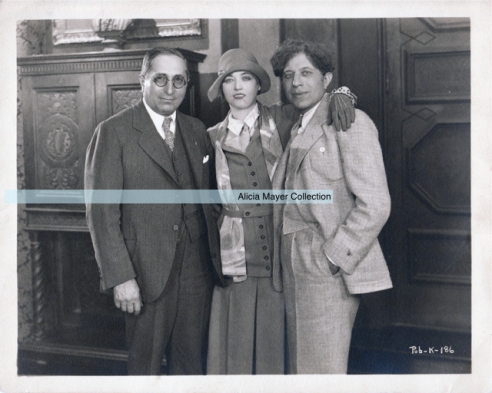 This photo from our family collection is a huge favorite of mine. My great uncle, Louis B. Mayer, stands comfortably next to a very young Marion Davies, who has an arm casually draped over the theatre impresario himself, Sid Grauman. I don’t know what year it is (late 20s?) or where it is but all three are smiling and looking straight down the barrel of the camera. (If you know more contact me here or here.)

As you can imagine, Sid Grauman kept theatre hours, which meant he rarely ever experienced mornings.

On one rare occasion, when he had to get up early, he said, “Birds were singing. How long has that been going on?”

Before the famous Grauman’s Chinese Theatre, what’s really fascinating is that he and his parents had two theatres in San Francisco that were all but destroyed during the catastrophic 1906 earthquake.

His father, however, dived into the rubble of one of them, pulled out a projector and some ‘picture’ reels, and by that night they were projecting onto the sides of a tent and entertaining weary citizens. They were even given a civic award for their services to the community. I wrote more about Grauman here.

One of the reasons why this photo is a favorite is because it proves what I’m always saying, which is that in those days there were NO degrees of separation in Hollywood – everyone knew everyone else. So just to add to that, as many of you would know, Marion Davies was William Randolph Hearst’s companion. When MGM gave Marion Davies a contract, Hearst gave MGM huge support through his network of papers.

And when L.B. was building his beach side home in Santa Monica, Hearst gave him a nifty stone gargoyle on a huge plinth – file that under gifts you give to ‘the mogul has everything.’

Hearst and L.B. would become great friends, so much so that when ‘Citizen Kane’ (1941) was released, known to be a thinly veiled attack on Hearst, my great uncle attempted to buy every print. I guess that’s how moguls support moguls pals?

I wrote about this beautiful house (where the Academy was conceived), the gargoyle, ‘Citizen Kane,’ and the many famous people who traveled through that home, including JFK and Marilyn Monroe, here.