Living in far flung Australia as I do, I’m extremely grateful when authors send me a copy of their book. The whole experience is a special treat. Somehow, there’s nothing quite like tearing into a package from overseas and pulling out a beautiful publication with that ‘new book smell’! Then there are the lovely inscriptions, which I always find so touching.

This happened last December when Bill Cassara so generously sent me a signed copy of his book, Nobody’s Stooge: Ted Healy, about the life, Vaudeville and Hollywood acting career, and mysterious death of the founder of The Three Stooges.

Several years ago, when my aunt sent me the first of our family’s photos, this pic from 1935 of my glamorous grandmother Mitzi Cummings with loveable rogue Ted Healy, was one of the first I researched.

As I dug into the reporting from the time, I stumbled across the headlines about his untimely death in 1937, shortly after the birth of his first child. He had been celebrating by painting the town red, including a potentially significant stop at the Trocadero Cafe. Tragically, Healy would never make a second visit to see his baby son…

As I pulled together a mini documentary about this story, I discovered I had a second connection through my great uncle Jack Cummings, Mitzi’s older brother, who directed Ted Healy’s early M-G-M shorts, including PLANE NUTS (1933) and HELLO POP! (1933), which was thought to be lost but a print showed up in a shed in Sydney. In fact, just miles away from where I live!

My friend Paul Brennan, who is devoted to film preservation, helped repatriate it back to the US, which first included a nervous bus ride with the film tin on his lap, hoping the nitrate contents wouldn’t spontaneously combust. Next came the logistics of sending it thousands of miles away. Thanks to wonderful people like Ron Hutchinson, another champion of film preservation and founder of the Vitaphone Project, it arrived safely and was duly restored and re-released by Warner Bros.

Here’s my post and the 5 minute ‘mini documentary’ examining the events leading up to and after Healy’s death.

A few years ago, I stumbled across a tweet that Photoplay magazine had been mostly digitized and was now online through the Media History Project. I knew that Mitzi had been one of their columnists but had never seen any of her articles.

Within a few seconds of finding that tweet, I was face to face with the published versions of the dozens of fabulous photos of Mitzi with the stars of the day, including Ted Healy, as you can see from this page from the March 1935 issue. 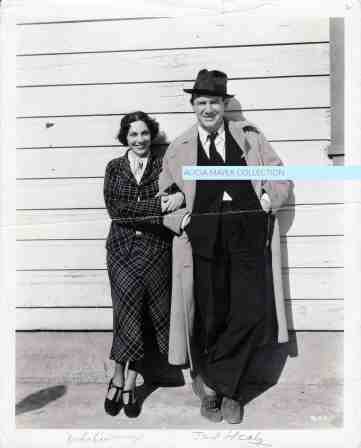 It turns out that former detective and investigator Bill Cassara also found Ted Healy an irresistible topic. He researched like a fiend and what he turned up about Healy is truly remarkable. I thoroughly enjoyed Nobody’s Stooge and I marvelled at the author’s discoveries — nothing is hidden for a real life gumshoe like Bill Cassara!

I highly recommend Bill’s book, which has a huge rating on Amazon too. You can buy it by clicking here.