Happy heavenly birthday to Walter Pidgeon who was born 120 years ago in Saint John, New Brunswick, Canada. The same city my great-great grandparents, Sarah and Jacob Mayer, settled in after leaving Ukraine in the late 1880s, and where they raised their children, Yetta, Ida, Louis, Ruben, and Gershon.

It is amazing to me how one far-flung Canadian community would create these two towering talents. Walter would go on to appear in well over one hundred films and Louis B. Mayer would, of course, head Metro-Goldwyn-Mayer.

Both held industry leadership positions too and were recognised by their peers. Pidgeon was on the board of directors of the Screen Actors Guild for 33 years and served five as president. In 1974, the Guild gave him their highest award, “For outstanding achievement in fostering the finest ideals of the acting profession.”

Louis B. Mayer helped found several industry related bodies, including the Academy of Motion Picture Arts & Sciences (AMPAS), which would establish the Academy Awards. At the 23rd Oscars ceremony in 1950, L.B. was recognised “for distinguished services to the motion picture industry” and presented with an honorary award. By then, he had been in the film business for over 30 years.

But if you’re wondering if Walter Pidgeon and Louis B. Mayer ever met in Saint John, it is very unlikely for several reasons, including culturally, and due to their age difference and timelines.

Their paths did cross thousands of miles away from home when Walter Pidgeon was called to L.B.’s office to discuss a long term contract with Metro-Goldwyn-Mayer. Of course, always on the lookout for the best of the best, Uncle Louis had seen his films and was deeply impressed. Naturally, he wanted his kind of talent at M-G-M.

Here’s the story as Walter Pidgeon recounted it himself to Charles Foster, a writer from Saint John:

“Louis B. Mayer peered at me over his glasses and suggested I tell him about myself. I started by saying I came from New Brunswick. That’s in Canada, I added.

Mayer jumped to his feet and thumped on his desk. “Young man,” he shouted, “you can’t influence me with lies like that. Who told you to say you came from Saint John?”

“Finally I quietened him down and convinced him I really was from Saint John.” said Pidgeon. “I had to tell him where half-a-dozen streets and buildings were that he remembered. But I left his office with a contract for much more money than I expected and we were friends until the day he died.”

During WWII, my great-uncle generously offered Pidgeon to the Canadian government at the expense of M-G-M. His activities on their behalf – bond drives, concerts, troop shows, etc. – raised over $5 million; an important contribution both financially and in terms of raising morale.

Despite his Hollywood success, he remained at heart a humble Canadian. In fact, his sole regret was having turned anyone away for an autograph. You can feel it almost haunted him. “I’ve felt pangs of regret for them all my life. I was so grateful to be asked.”

I love the photo of him above with the wonderful Greer Garson in Mrs. Miniver (1942) directed by William Wyler, for which they were both nominated for Oscars, and, of course, Greer took away Best Actress. Interestingly, both of their careers had new impetus after this picture, the top-grossing film for 1942. But whereas Pidgeon was up for the role immediately, Greer had to be convnced, so much so that it took Uncle Louis actually reading the ENTIRE script to her and her mother in his office. He actually acted out her parts, which I find very endearing.

Pidgeon’s amazing filmography includes dozens of well loved favorites, including How Green Was My Valley (1941), Madame Curie (1943), That Forsyte Woman (1949), and as Florenz Ziegfeld in Funny Girl (1968), much later in his career. Unfortunately, despite two Academy Award nominations, he never did take home an Oscar. 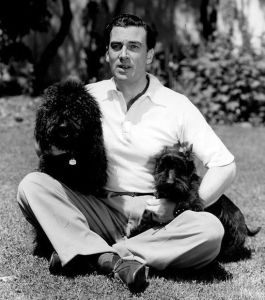 In the 1950s, after a 20-year abscence, Pidgeon returned to Broadway. He was featured in ‘Take Me Along’ with Jackie Gleason and received a Tony Award nomination for the musical play. He continued to make films but also discovered huge opportunities on television. Pidgeon guest-starred in the episode ‘King of the Valley’ (November 26, 1959) of CBS’s Dick Powell’s Zane Grey Theater. His other television credits included ‘Breaking Point,’ ‘The F.B.I.,’ ‘Marcus Welby, M.D.,’ and ‘Gibbsville.’ In 1963 he guest-starred as corporate attorney Sherman Hatfield in the fourth of four special episodes of ‘Perry Mason’ while Raymond Burr was recovering from surgery.

Pidgeon married his hometown sweetheart, Edna Muriel Pickles, in 1919, but tragically she died just two years later giving birth to their daughter, also named Edna. In 1931, he married Ruth Walker and they remained together until his death.