I’m still on my Mary Pickford letter bender and found this one in our collection from exactly 67 years ago. Evidently, she and my great-uncle Louis B. Mayer had a “scheme” to raise “a substantial sum of money” for the Los Angeles Jewish Home for the Aged. It’s so hush hush that Mary won’t even reveal what it was unless they were successful… Wow.

And I love this vote of confidence for her co-conspirator:

“Should it fail, I am confident Louis will not let us down but will think up some other plan. Therefore, don’t worry dear. It is God’s work and He will not fail us.”

By 1950, Mary Pickford had known Ida’s younger brother Louis B. Mayer from at least the 1910s, and in terms of fundraising, the three had been working behind the scenes for the JHA for about a decade. Of course, Mary had been one of the 36 founders of the Academy of Motion Picture Arts and Sciences back in 1926, and worked closely then with L.B. and the others, including her then husband Douglas Fairbanks, to make it a reality. So it’s safe to say, Mary and Louis knew each other very well.

But what on earth could the “scheme” have been? And did it pay off? I hope I eventually discover this in the letters and telegrams I scanned from the JHA’s archive back in August. Of course, I’ll let you know if/when I do.

In her final paragraph, Mary mentions not seeing Ida’s portrait so it sounds as if she was not at the unveiling event of the beautiful painting to celebrate and honor Ida as president of ‘Junior Auxillary’, JHA’s fundraising arm. She would serve as president for roughly 20 years.

When I went to the Home in August for my epic scan fest, some of you might remember that the executive director generously presented me with this actual painting, which I brought back with me to Sydney.

There was also a matching portrait painted of Mary Pickford and the two were on opposite walls in the old JHA boardroom – I used to have a photo of this but can’t seem to find it today! I understand the portrait is now held by the Mary Pickford Foundation.

I’ve included a photo of Mary standing in front of the sign that was erected at the building site, and the architect’s rendering of what the building was to look like. I have no idea if that was ultimately what was built.

Mary Pickford spearheaded the campaign to raise funds for a new building for the Los Angeles Jewish Home for the Aged. She worked in partnership with my great-grandmother Ida Mayer Cummings and her younger brother, Louis B. Mayer, as well as many prominent Los Angelenos and Hollywood notables. 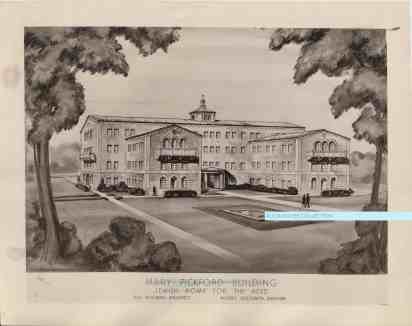