Yesterday, while reading paperwork and letters from one large envelope my grandmother Mitzi Cummings Fielding set aside in the 1970s, I followed a trail that led me to a wealthy couple from Los Angeles who were either jinxed or blessed, I am honestly not sure which.

It all started with a delightful four page report by a Mrs. Anna Belousoff, dated April 5, 1948, about the groundbreaking ceremony for the Mary Pickford Building, a project spearheaded for the Los Angeles Jewish Home for the Aged by my great-grandmother Ida Mayer Cummings, her brother Louis B. Mayer, and Mary Pickford.

The last page of Anna Belousoff’s 4-page report about the Mary Pickford groundbreaking ceremony. She mentions the speech given by Louis B. Mayer, which was evidently quite moving. 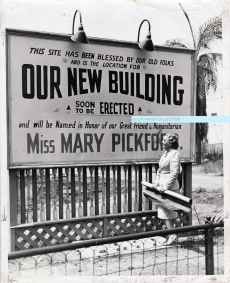 Mary Pickford spearheaded the campaign to raise funds for a new building for the Los Angeles Jewish Home for the Aged. She worked in partnership with my great-grandmother Ida Mayer Cummings and her younger brother, Louis B. Mayer, as well as many prominent Los Angelenos and Hollywood notables.

Naturally, I became curious about Anna Belousoff, as Ida’s ‘Auxiliary’ committee included the who’s who of L.A.’s Jewish community.

And that’s when it got very interesting…

Like most pharmacies of the day, Schwab’s had a soda fountain and served light meals so was a busy hub all day long. There’s a persistent rumour that Lana Turner was discovered there sitting at the counter sipping a Coca Cola, but evidently this not so. Still, it was the drugstore of the stars, and for decades.

According to the website filmsofthegoldenage.com, today’s fans of the Golden Age of Hollywood need only set their time machine to their favourite year and head to Schwab’s for a full immersion experience:

“In the ’30s and ’40s you could spot Judy Garland, Mickey Rooney, Orson Welles, Ida Lupino, the Marx and Ritz Brothers, Marilyn Monroe, and Ronald Reagan rubbing shoulders with the rabble here. Chaplin and Harold Lloyd came to play the pinball machines… Struggling young performers could always drop in for a free meal. One of them, Ava Gardner, landed a job behind the soda fountain while waiting for her big break.”

Sidney Skolsky, a syndicated Hollywood gossip columnist for the New York Daily News, used the drugstore as his office. His column in Photoplay was hilariously called ‘From A Stool At Schwab’s’.

Later, in the 70s, Schwab’s hosted a new generation of celebrities. Again from filmsofthegoldenage.com:

“Schwab’s was frequented by music-biz types like Cher and Linda Ronstadt. Ronstadt was usually accompanied by her then-boyfriend, California Governor Jerry Brown, and she always picked up the check.”

But back to the Belousoff’s… The prosperous couple lived in a beautiful home in Beverly Hills at 808 N. Linden Drive and twice, within just a few months, they would be feet away from shocking and violent events that would be reported around the world.

In the early 1940s, millionaire Howard Hughes began designing the Hughes XF-11, a reconnaissance airplane to be built by Hughes Aircraft for the United States Air Force. Although 100 were ordered, only two were ever made.

On July 7, 1946, Hughes took one of the FX-11 prototypes for a test flight but the aircraft ran out of oil and he crashed directly across from Martin and Anna Belousoff’s home. They were very, very lucky — the crash, and subsequent fire, destroyed three houses but miraculously no one was killed, though Hughes was very badly injured.

I can just imagine the Belousoff’s hearing the horrific sounds, running to their front door, and opening it to a scene of utter destruction, with wreckage and flames everywhere. Then, for weeks, the neighborhood crawled with investigators, photographers, journalists, and Hughes Aircraft personnel.

Months later, with the major signs of the crash carted off and rebuilding underway, the Belousoff’s next door neighbor Virginia Hill began dating mobster Bugsy Siegel.

Evidently, Martin Belousoff had sensed something was amiss. Over a few months he had noticed a small sedan parked across the street, as he later told detectives:

“There was a man in it, dressed in working clothes. He would park there all day sometimes, and often stayed there until very late at night.”

More than likely, Belousoff was observing one of Siegel’s heavies keeping watch out on the street.

At about 10:45pm on June 20, 1947, while Bugsy Siegel sat reading a newspaper in the living room, a gunman positioned himself in the Belousoff driveway and fired a volley of bullets from a .45 machine gun.

Aside from enduring the disruption of another set of investigators, photographers, and journalists, the Belousoffs must have been shocked to imagine a cold-blooded assassin only feet away from their bedroom window.

Just ten months later, the star-studded Mary Pickford event was held. Considering Mrs. Belousoff’s proclivity for being in the wrong place at the wrong time, my great-grandmother Ida and her fellow committee members would have been forgiven for crossing their fingers that a meteor didn’t choose that moment to fall from the sky!

Schwab’s closed in October 1983. A few years later a mall was built on the site centering around Virgin Records, which was then shuttered in 2008.