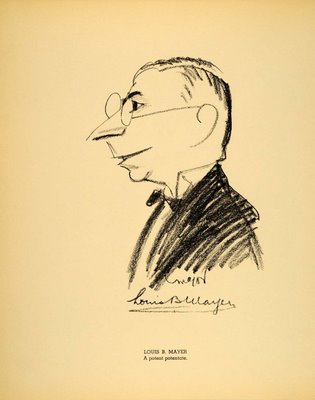 1. Your money or your life

On June 26, 1942, Louis B. Mayer received a rambling three page letter purportedly from six men who wanted him dead, but would accept $250,000 to let him live.

This was ominously attached to a news clipping from the Los Angeles Times about an unsolved murder, and above the headline had been scrawled:

“THIS MAN THOUGHT WE WERE KIDDING.”

A week later Louis B. Mayer received a post card demanding the huge sum should be left at the Ambassador Hotel and addressed to a “Robert Sexton“. On July 13th, two men — Meyer Phillip Grace (39, a former boxer) and Channing Drexel Lipton (25, noted as a gas attendant) — attempted to pick up the parcel and were immediately arrested by the FBI.

The matter went to trial but despite it looking like an open and shut case, and both men admitting to their actions, Grace and Lipton were acquitted.

Channing Lipton was the son of former M-G-M writer Lew Lipton and during his testimony he claimed he had attempted the extortion because he was upset that his father had been ‘blacklisted’. Lipton’s own attorney called in a psychologist because he was concerned his client was “temporarily unbalanced.”

Silent movie star Francis X. Bushman stepped back into the limelight by sending a letter to the judge about blacklisting in Hollywood and disparaging Louis B. Mayer. The judge was so incensed by his interference he called Bushman “un-American” and threatened to share his letter with the U.S. Attorney-General.

Between the testimony of the two defendants, and Bushman’s letter and his comments to the press, there was so much mud thrown about that the judge had to remind everyone that Louis B. Mayer was the victim of a violent threats and extortion, and was not on trial.

Were Lipton and Bushman the victims of blacklisting or had their careers simply petered out? Perhaps the answer is in the FBI briefing in which Lew and Channing Lipton were described as having a “persecution complex” about Louis B. Mayer.

The rest of the answer lies in Hollywood itself — a town like a voracious monster, always hungry for new talent.

In May 1939, Louis B. Mayer was awarded an honorary Doctor of Laws degree from the University of New Brunswick for “cultural advancement of moving pictures.” That day he also attended a luncheon given by New Brunswick Premier A. A. Dysart and his cabinet during which he was also bestowed the “freedom of the city of Saint John.”

In his speech Louis B. Mayer told the audience:

“Refuse to be discouraged. Sweat and sweat some more, work and work some more. If you have anything at all you’re bound to get there.

I am sentimental enough to feel she knows I am being honored by my home folks. I believe she knows and is smiling. My heart is overflowing.” 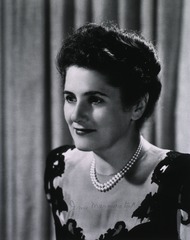 Jessie Marmorston M.D. became Louis B. Mayer’s doctor after he witnessed her take charge when one of the men at a Sunday night poker game suffered a massive coronary. Marmoston was issuing orders, telling the M-G-M execs what to do or get the hell out of the way.

Louis B. Mayer was stunned and asked who on earth was this woman. Someone replied that she was a doctor. Then and there he decided she would be his doctor too.

Most days Louis B. Mayer would send his car to pick her up from her home, and he not only relied on her as his personal physician but also vented about his family and the business. Dr. Marmorston became his sounding board and her regard for him in return was enormous.

Despite their very close friendship, Marmorston always called him ‘Mr. Mayer’ and he always referred to her as ‘Doctor.’

With thanks to Lion of Hollywood: The Life and Legend of Louis B. Mayer by Scott Eyman.

10 thoughts on “Three Things You Didn’t Know About Louis B. Mayer”