In this photo, joy meets agony… This is a portrait of my great-uncle Leonard “Sonny” M. Cummings who died at just 44 years old in 1965.

Because of this, and because Leonard smiles through his eyes with a direct gaze that looks right at you – I feel I know him, but he died before I was born. His death notice below provides a list of details from his short life that breaks my heart: Leonard lived in my great-grandmother’s home, he was a sports publicist, a veteran of WWII, got a degree from the University of Missouri… he died after a long illness. He died on a Wednesday.

We all have a day that we will die on, and in Leonard’s case it was Wednesday, a time when a young man should be in the middle of a busy week. Instead, Leonard took his last breath with no more to give and no more to get.

Who was with him in his room when he died in Cedars of Lebanon hospital? I hope that my great-grandmother, his mother, Ida Mayer Cummings was there, as well as his older brother Jack Cummings and two married sisters, my grandmother Mitzi Cummings Fielding and great-aunt Ruth Rowland. Was Leonard also blessed with a woman who loved him and could not bear to let him go? I hope she was there too, though thinking about her grief knowing that she and Leonard would not have a family together, would not go off happily ever after together, is too painful.

I can only imagine that after a long, horrid illness that this handsome young man, who looks in this photo like he was just about to say something funny or had managed to get a quip in before this shot was taken, was but a shadow of himself. Thin and frail, he would have been unrecognizable from the young student and soldier he had been the decade before.

I hope, in the end, that Leonard slipped away without pain or suffering. I can see my great-grandmother holding his hand, and as Leonard passes, kisses his head and says a prayer for her son. Ida died three years later, but I am sure she never imagined she would bury her youngest child, or all three of her younger brothers – Louis B Mayer in 1957, Rudolph Mayer in 1951 and Jerry Mayer in 1947.

I understand that Leonard died of leukemia, just like uncle Louis. But unlike LB and the rest of the family, his intended trajectory was nowhere near MGM and the family business – film was obviously not his thing. Somehow the term “sports publicist” seems terribly modern. I wished that I knew more about what Leonard did and for whom.

In the meantime, I find myself gazing at this long dead great-uncle who looks for all the world like my son. The joy and agony that is DNA. 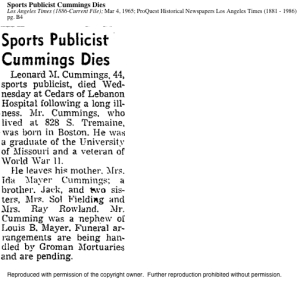