Circa 1960: Ida (older sister of Louis B. Mayer) with Rabbi Magnin, who served the Wilshire Boulevard Temple for 69 years from 1915.

I am so proud of my friend Aaron Wolf’s documentary, Restoring Tomorrow, about the Wilshire Boulevard Temple, which my great uncle, Louis B. Mayer, and other studio moguls helped to build so long ago.

I actually wrote about this mammoth $150 million restoration project when it was announced several years ago, partly to explain the legendary Rabbi Edgar Magnin, the moguls’ spiritual leader – a tough but rewarding gig if ever there was one. He and my great-grandmother, Ida Mayer Cummings, were very close, both serving the Los Angeles Jewish community for most of their long lives.

Although at the heart of the Restoring Tomorrow documentary is the choice to rebirth one house of worship and one congregation, it really echoes a worldwide trend of shrinking faith-based communities as younger generations ask what’s in it (God/religion) for me?

Aaron Wolf, a young filmmaker busy living his life and prior to filming almost entirely physically, spiritually and emotionally removed from any connection to the Temple, which had figured so prominently in his childhood, suddenly felt the urge to document its restoration. His personal journey of re-connection is both deeply personal and universal. There is a scene in which he is reflected in a photo of his grandfather, Alfred Wolf, who had been senior rabbi at the Temple for decades, and you can feel the love, pride and hope that flows through generations. 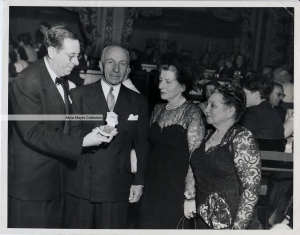 Rabbi Magnin with Harry and Rae Warner and my great-grandmother, Ida Mayer Cummings. The Warner brothers were huge contributors to the building of the Wilshire Boulevard Temple.

The current senior rabbi, Rabbi Steven Z. Leder, who spearheaded the restoration with a fervor that is, well, religious, is the film’s co-hero. He knows he must and will succeed.

Once the will was there, and money was found, an inspiring team came together, including the leading architect, a woman who has also been a longtime member of the congregation, as well as the many talented artisans who dedicated blood, sweat and tears to returning the remarkable sanctuary’s paintings, plasterwork, and more to all their glory.

As far as my tiny involvement is concerned, I had the good luck to stumble across the documentary in its final stages in late 2015, so was just in time to supply some photos from our family’s collection.

A few month’s later, Aaron and producer Tim Nuttall were kind enough to allow me to show the film to two small, elderly audiences here in Sydney. To say the film resonated with them is an understatement as they have seen their own children, and their children’s children, drift away from the shules and community centers they helped build here decades ago.

It was a privilege to watch these two audiences respond to the film’s universal message. Despite Sydney being thousands of miles away from Los Angeles, the story resonated clearly.

No matter what religion you are, I promise you will be touched by this emotional film so if it comes to a theater near you (as they say) go see it! And if you’ve been a follower of this blog I am sure you will also be able to identify the handful of photos I contributed – let me know, I’d love to hear from you via my official Facebook page or on Twitter.

Now that Restoring Tomorrow has been acquired for theatrical release by Seventh Art Releasing, which specializes in documentaries, I look forward to seeing it in cinemas here in Australia very soon!

Mazal Tov, Aaron and the team!