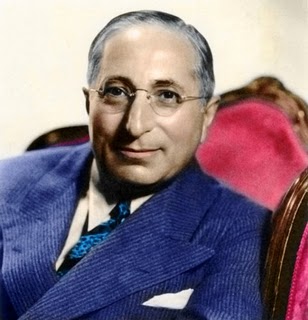 “Regarding Urwand’s sickening claims about my own great-uncle, Louis B. Mayer, Greco says, “Urwand writes unaware or indifferent to the terrible libel he is committing.”

I need your help. Imagine for a moment that your family has been accused of collaborating with Hitler and the Nazis.

Really let that thought sink in. Your family has been accused of collaborating with THE NAZIS. And, partly because of this supposed collaboration with the world’s most heinous, murderous dictator, six million Jews, and other innocents, perished. And ancillary to this, imagine – or perhaps this is the case – you are Jewish and all of your life the thought of the Holocaust has been an unbearable nightmare, because after all these are your people, literally and figuratively.

Are you with me now? If so, you have hopefully gotten a sense of what the last few weeks have been like for me since the reviews began flowing in for Ben Urwand’s book, The Collaboration: Hollywood’s Pact with Hitler, published by Harvard University Press.

It all started on June 25th with a New York Times book review by Jennifer Schuessler claiming within the second paragraph that “Ben Urwand draws on a wealth of previously uncited documents to argue that Hollywood studios…not only acquiesced to Nazi censorship but also actively and enthusiastically cooperated with that regime’s global propaganda effort.”

The review linked to an article by David Mikics in Tablet Magazine (promoted as ‘A New Read on Jewish Life’), that went so far as to finish with “Hollywood could have helped awaken the world to the looming danger of Nazism, but instead the Jewish dream-makers cast their lot with the world’s—and the Jews’—greatest enemy.” (Importantly, David Mikics did not reveal in his review that he is ALSO published by Harvard University Press.)

The next article I read was by noted rabbi, Benjamin Blech, writing for Aish.com, a favorite of mine. This one kicked me while I was down, basically echoing what Mikics said but this time a rabbi – someone I have so much respect and admiration for – essentially called my great-uncle, Louis B. Mayer (and the other Jewish moguls), traitors to their own people.

ALSO READ: Face to face with Ben Urwand. The question I asked at his only Australian talk and his reply.

If you’ve stepped into my shoes at all, you can imagine that by now I was in a state of shock. How could one book destroy the amazing legacies left by my family and those of the Warners, the Goldwyns and others? How could my family be accused of not just tailoring films to eliminate all traces of “Jewishness” for Nazi led Germany, but actually working with them to peddle their terror and hate?

To get some clarity, I immediately turned to two of the academics mentioned in the New York Times article, Professors Steven J. Ross and Thomas Doherty, as well as the founder of the Motion Picture Producers and Distributors of America (MPPDA) Digital Archive, Professor Richard Maltby, and finally, best-selling biographer and film historian, Scott Eyman, who has written extensively about the early Hollywood moguls, including Lion of Hollywood: The Life and Legend of Louis B. Mayer. I also contacted my cousin, Daniel Mayer Selznick, who has a book coming out later this year about his grandfather, LB Mayer, and his father, David O. Selznick.

After a flurry of emails I regained some confidence that Urwand was “overstating” his research and that he “didn’t appear to have any grasp of the film business whatsoever.”

Then came front page coverage in The Hollywood Reporter (THR) with an accompanying graphic depicting a swastika on the iconic Warner Bros water tower. By this time I had reached out to my friend Cass Warner, granddaughter of Harry M. Warner, who had not yet heard of the Urwand book. Like me, Cass was deeply shocked and appalled. She was also galvanized into action.

On July 31st, we were all delighted when Professor Doherty’s excellent rebuttal ‘Does The Collaboration Overstate Hollywood’s Cooperation With Hitler?’ was also published in THR. Doherty pulled no punches and called Urwand’s book “slanderous and ahistorical.”

Shortly thereafter I woke to find an email from Danielle Berrin, who blogs under the ‘Hollywood Jew’ banner at the Jewish Journal, one of the largest Jewish news sites outside of Israel with something like three million hits per month. She asked if I would be willing to comment on Urwand’s book. Of course! I was ready to put gloves on and hop into the ring. In our hour-long conversation – Skyping with me in Sydney and Danielle in Los Angeles – she asked me the main question I had been contemplating for weeks: why was everyone, including other Jews, so quick to believe in Urwand’s outrageous claims?

The answer is fourfold:

After my long interview with Danielle I had high hopes that she would write another rebuttal but instead she chose to widen the discussion under the headline, “Hollywood’s Deal with the Devil,” which desperately needed at least a question mark to flag down the fact that her review contained mainly critical comments from myself as well as Cass Warner and Quentin Tarantino. But, as I emailed after I read her piece, a conversation built on top of research and claims called into question by the majority of film academics is unstable ground. Danielle did follow up with a Q&A with Tarantino on why Jack Warner remains his hero.

But today I received an email from Cass Warner titled, “IMPORTANT” and with a link to an excellent rebuttal by film writer and historian Mike Greco who, like Thomas Doherty, systematically takes Ben Urwand’s claims apart coming to the conclusion that it is as much a fiction as Mel Brook’s The Producers and would be just as laughable if it wasn’t for the fact that the book “demands that its readers take its baseless assertions seriously.” Regarding Urwand’s sickening claims about my own great-uncle, Louis B. Mayer, Greco says, “Urwand writes unaware or indifferent to the terrible libel he is committing.”

And Greco is just as shocked and confused as I was that so many “reviewers of The Collaboration: Hollywood’s Pact with Hitler cannot imagine that a Harvard University Junior Fellow ‘could have the impudence to distort the truth so infamously.’ These reviewers are very much mistaken.” Here’s where I fist punched the air and hissed “Yes!” so dramatically that I startled a colleague of mine.

Folks, I now return to where I started with this essay – I need your help. When you can, where you can (in your own blog, in tweets, on Facebook, under the reviews as a comment and so on), please share the two rebuttals below:

Show Ben Urwand that he will NOT be allowed to assassinate the legacies of the Mayers, the Warners, the Goldwyns and the others. Were these men angels? Of course not – they were creating Hollywood and that took blood, sweat, tears and legendary amounts of chutzpah. But did they “collaborate” with the Nazis? NO.

I will leave the last word to Thomas Doherty, “Hollywood did more than any other for-profit business to sound the alarm against Nazism. It is a story not of collaboration but resistance.”

12 Responses to “A Rebuttal to Ben Urwand and The Collaboration: Hollywood’s Pact with Hitler”