This year, for the first time in decades, Christmas Eve and the first night of Chanukah fell on the same day. This is such a rare event that when I sat down with my great-grandmother Ida Mayer Cumming’s scrapbook this morning, my jaw dropped when I saw mention of exactly the same holiday alignment in 1940. The last time that had happened was fifty years earlier in the late 1800s. It is the religious equivalent of Halley’s Comet.

On this particular scrapbook page were several clippings about an ‘historic Chanukah fete’ held on December 18th 1940, which was co-hosted by Ida and Mary Pickford for the Los Angeles Jewish Home for the Aged. The two often worked hand-in-hand as a fundraising force on behalf of the Home’s Ladies Auxiliary, with Ida as president and the main mover and shaker (Bob Hope said she was the only woman he knew who could grab a man by the lapels over the phone), and Mary Pickford as Auxiliary chairwoman, Hollywood’s First Lady and as such, drawcard-in-chief.

Together, this dynamic duo hosted a staggering number of luncheons and other major events over 20 years, usually with a VIP speaker of national, and often international importance. The guest list was always packed with luminaries. At a table you could have Gary Cooper and his mother sitting with an Oscar-winning filmmaker, a bishop, a rabbi, a senator, a studio head, scions of wealthy families, and giddy young socialites.

On this occasion, the guest speaker was Eleanor Wilson McAdoo, the daughter of former president Woodrow Wilson, who came to deliver a powerful message about the role the United States could and should play in the League of Nations. 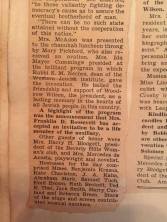 But by then, the League was already 20 years old, and as an organisation tasked with promoting world peace, following the end of WWI, it seemed entirely impotent with the fall of France just a few months earlier, and Germany’s invasion of Poland in September 1939. The US, as Mrs McAdoo boldly observed, “seemed to be indifferent to the present war.” Of course, the Americans would not throw their hat in the ring until nearly a year after that lunch, following the bombing of American ships stationed at Pearl Harbour by the Japanese on December 7th 1941.

As Mrs McAdoo spoke on the afternoon of December 18th 1940, she could not have known that on that same day Hitler had issued Directive No. 21, codenamed ‘Operation Barbarossa,’ to initiate the German invasion of the Soviet Union. And eerily, just four days before, and 375 miles north of Los Angeles, plutonium had been isolated and produced at the University of California, Berkeley.

The mood must surely have been sombre, despite the proximity to Hollywood’s famed studios, and the glamorous and influential crowd. Though that year’s film releases included the 9th instalment in the Andy Hardy series (Andy Hardy Meets Debutante) and Philadelphia Story, there had been a flood of war films, including MGM’s magnificent Mortal Storm, Charlie Chaplin’s masterpiece The Great Dictator, as well as Foreign Correspondent, The Long Voyage Home, Ski Patrol, Women in War, and a handful of pictures from the UK, including Convoy and Night Train from Munich.

Following her impassioned speech, two very elderly residents of the Home presented Mrs McAdoo with a Star of David.

Then Rabbi S. E. Neches joined her on the stage and said:

“The first words of the Lord recorded in the Bible are, ‘Let There be Light’. No one can live in darkness. Every year the Jew rededicates himself to the spreading of the light through the world.

We shall continue to do so despite Adolph – we do not mention the rest of his name. Adolphs or no Adolphs, Israel will still go on. What we suffer is only temporary.

Surely, in the final reckoning, light will triumph over darkness.”

And then my great-grandmother brought this deeply moving event to a close with these words, most likely penned by my grandmother Mitzi, a talented writer at MGM and Photoplay columnist:

The audience was led in the singing of the national anthem and the afternoon’s proceedings ended with rousing applause.

What those in attendance could not have known, but which history would bear out, were the momentous events bearing down in quick succession – the legacy of which still impact us today, 76 years later as Chanukah and Christmas converge again…

That every speakers’ words – Eleanor Wilson McAdoo, Rabbi Neches, and Ida Mayer Cummings – could have been written yesterday, despite being uttered nearly 80 years ago, is chilling. How little ground we have made.

And like the League of Nations, which struggled to prove its relevance during a time of world crisis, the United Nations is now, arguably, in the same position. Its effectiveness and credibility, not only of the UN but also several of its agencies (including UNESCO and UNRWA) are continuously weakened by bias, hypocrisy, and scandal.

The UN’s continuous stream of anti-Israel resolutions, especially at the hands of notorious human rights abusers, and others with obvious agendas, would be laughable if it wasn’t so tragic.

Nevertheless, as Rabbi Neches said, Israel will still go on.

Today/tonight Christmas and Chanukah converge (the second of eight nights), and it will be decades before this happens again. What world we will have then? What part will we, and world leaders, play in helping to bring about that elusive peace and goodwill?