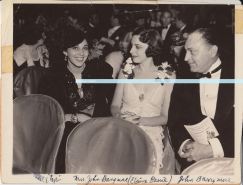 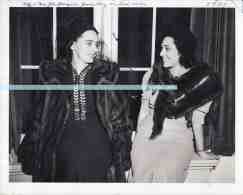 Over the years, the Cummings and Mayer families had a bit to do with the Barrymores — their lives intersected through the ‘picture’ business, charitable events, and parties.

Then again, Hollywood’s early ‘film colony’, as it was referred to, was really a tiny village with no degrees of separation for a core group of industry stalwarts and their families. Everyone knew each other and often had known each other from vaudeville and the early days of the silent movie business back east in New York and Boston. For instance, Louis B. Mayer’s daughter Irene married David O. Selznick and L.B. would have to put aside his dislike of David’s father Lewis J. Selznick, who he had known as a silent movie distributor back in New York, when it was the hub of the film business.

The first photo I’ve included shows my grandmother Mitzi Cummings (niece of Louis B. Mayer) with John Barrymore and this fourth and last wife, Elaine Barrie, who had actually changed her name from Jacobs. Barrymore and Barrie had a tumultuous relationship, to say the least, which ended in divorce just a few years later. A lot has been written about who did what to whom, but I won’t go into that here, just to say that the Jacobs appeared to approve of their young daughter’s marriage to one of America’s most celebrated actors; whereas, his brother and sister, Lionel and Ethel Barrymore, did not. (I’ve included a photo of John Barrymore in Hamlet, 1922.)

The next photo shows Elaine with her mother Mrs Jacob and Mitzi with her mother, Ida Mayer Cummings, Louis B. Mayer’s older sister. I think they are all attending one of Ida’s gala events for the Los Angeles Jewish Home for the Aged, which she turned into the must-attend event in Hollywood’s social calendar. It seems quite amazing today, but my great-grandmother’s annual function attracted hundreds of VIP guests from so many walks of life, and for decades. Sadly, although Ida devoted her life to fundraising for the Home for decades, she is not even mentioned on their ‘History of the Jewish Home’. However, the pages features photos of Mary Pickford and Shirley Temple, who only took part in JHA functions because they were invited by Ida.

Then there are photos of Mitzi and my grandfather Sol Baer Fielding and others being led down the stairs by Ethel Barrymore, and Ethel addressing an audience with the legendary George Jessel looking on. I can’t begin to tell you how much talent and influence is in that photo: Barrymore and Jessel embody America’s incredibly rich and diverse show business offering, from vaudeville and the early days of legitimate theatre all the way through to the studio system. Wow. (I’ve included a photo of a young Ethel Barrymore from 1901 in Captain Jinks of the Horse Marines.)

The final photo in this series shows my great uncle Louis B. Mayer at what appears to be a press call with the great Australia actress May Robson (Australia’s first Oscar acting nomination and also a supporter of the JHA), Irving Thalberg and Lionel Barrymore. I’m not sure what movie this would relate to – any ideas? (You can add to this post on Facebook here or tweet me here.)

For many, Hollywood has always seemed to be more of a mirage than a real place, but for a short, magical time, it was where remarkable lives were lived.